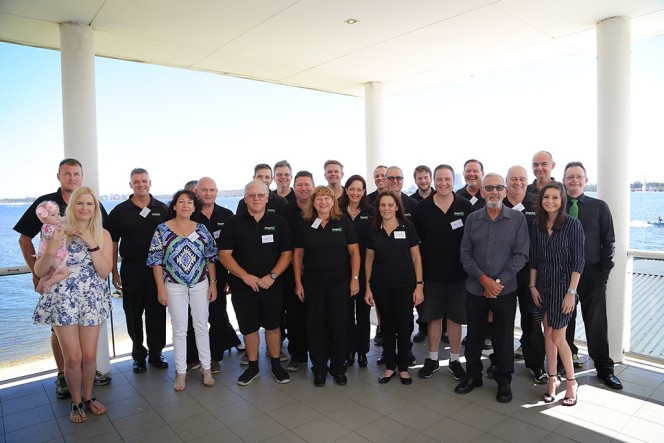 The Ovenu brand was formed in 1994 by Rik Hellewell and, over 20 years later, Rik is still the owner & Managing Director. He explains …

“The original idea behind the general oven cleaning concept was subliminally given to me by a good friend and business colleague, John Taylor, back in 1992 following his return from a family holiday to New Zealand where John had stumbled upon a mobile BBQ cleaning service.

This was one of those ‘off-the-cuff’ comments that remained in the back of the mind for a long time before action was taken. And it wasn’t until the back end of 1993 when we started to hatch a plan to significantly modify the somewhat shaky system that John had witnessed a couple of years earlier. We needed to bring something a bit more sophisticated than a cut-off oil drum filled with washing powder to the party!

We knew that our idea was going to be extremely popular in due course but we wanted to implement large scale expansion plans without the use of sub-contract labour per se. We also wanted to protect our ideas, thoughts & equipment and, most importantly, to set about proving that the entire concept would be financially viable.

First off was to dream up a Company name that could be registered as a Trademark. We wanted something vaguely ‘clever’, something memorable but couldn’t be a name made up of real words as this wasn’t permitted for Trademark purposes.

Ultimately we decided to use the phonetic abbreviation of ‘making an oven look like new’ … OVENU.

So OVENU was (eventually) registered as a Trademark and has been now for over 20 years. The registration was, and still is, vitally important as this prevents anybody from using anything identical or even phonetically similar. (It’s probably quite comical these days to be reading this on a computer screen or even a mobile device as, back in the day, the registration process took what seemed like ages using paper, envelopes and stamps! At roughly the same time that we we’re getting off the ground, Tim Berners-Lee was working hard at perfecting the World Wide Web).

Next on our agenda was to design and register a premium quality heated dip-tank assembly (rather than the rusty old oil drum idea) for cleaning all of the removable parts from an oven, including items that would be adversely affected by the most common ingredient of shop bought oven cleaners, namely caustic soda.

We had already noted by reading the ‘Warnings’ on aerosol tins that using caustic soda (sodium hydroxide) would mean that a lot of internal and external parts of a domestic oven could be damaged. This somewhat ‘flew in the face’ of what we were planning on offering consumers … an oven valeting service which involves cleaning each and every component back to brand new.

As an apprentice trained mechanical engineer, the designing of our process tank was pretty straight-forwards. The hardest part was to bite the bullet involving the cost of the extremely expensive hygiene-grade material that we had chosen! But that’s just one of those things … if you’re going to do anything, it might as well be done properly and, as we planned to charge well for our service, we weren’t prepared to compromise on quality anywhere down the line.

We sought, and obtained, a Registered Design for our equipment at the Patents Office and we’ve maintained our registration ever since.

Exactly the same set of challenges presented themselves when searching for suitable and appropriate cleaning materials. We needed products that worked well but didn’t contain the dreaded caustic-soda.

Fortunately, having been heavily involved in the carpet & upholstery cleaning business for over 10 years previously, I knew lots of the right people to chat with and discuss our new requirements. A good job really as we couldn’t just ‘Google It’ as we could today!

By this time we’re into early 1994 and almost ready to get the show on the road. We’ve got a smart name to trade with, top-notch equipment and excellent products. Now we just needed to practise like mad and learn how to take all of the parts from numerous different ovens, cookers and stoves to pieces, clean them to perfection and put them all back together again.

By this stage you’ll be forgiven for thinking that my middle name (if I had one) is ‘lucky’. Why? Well one of my friends going back 40 years or so was a driver for a skip company and he had access to dozens of ovens for us to practice on; so we did. We spent hours & hours for what seemed like days on end learning what was possible and what wasn’t.

By April of 1994 we were all set … well almost. All we needed now were some fee paying customers!

A couple of weeks later with advertising & marketing duly ‘sorted’, we arrived on Monday 18th April 1994 at our first OVENU client’s home and, a few hours later, we were £36.00 better off!

John and I worked well together for many months until he and his (then) young family relocated to Somerset.

The ultimate objective, as I mentioned earlier, was to grow the business and the brand across the UK but we’d always wanted to do this under the remit of having others run their own business under our branding and with our help and support. Research using all of the resources available at that time suggested that franchising was potentially the best way forwards.

The majority of the ‘wise words’ suggested that it would be prudent to run a pilot scheme for a year or so to prove viability before launching the business as a franchised opportunity. I didn’t sit comfortably with this idea; I just didn’t consider a year to be long enough. We therefore ran the pilot scheme for FIVE YEARS. And that was a full five years often working at least 6 days a week as popularity grew. This turned out to be the right thing to do as we were subsequently able to provide a far better representation of our business model to those who were becoming increasing more interested in working with us.

We were, and still are, able to show how an OVENU business builds and develops over time. We can demonstrate how regularly clients use our service, what level of referral business is generated, how many people move house etc. Our patience and ethical approach in the early days was well worth it.

In April 1999 I formed Ovenu Franchising Limited so that the business was in the public domain and, using the information and data that we collected from our pilot scheme, we started to appoint franchisees throughout the UK. The business has remained under my constant Managing Directorship from day one right up until now; something that we’re extremely proud to mention.

Our process tanks have had 19 small modifications over the years; nothing radical, rather simple little tweaks and additions that make them more efficient to help franchisees with their day to day tasks.

Our unique product formulations have altered over time in line with numerous changes in legislation, health & safety and re-cycling requirements.

Ovenu Australia was launched in 2005. Bernard and Janet Bannon had returned to Jersey in the Channel Islands in 2003 to open a restaurant and saw Ovenu on a “How clean is your house” TV show. They returned to Australia in October 2004 after securing a commitment from Rik Hellewell to open the first Ovenu business in Perth Western Australia, with the view to franchising in due course.

We have been members of the Franchise Council of Australia since 2006 and operate under their code of conduct, which sits under the trade practices act. There is strict legislation on how a Franchise System ought to be run and we welcome the monitoring of the industry to support reputable brands and weed out the Franchisors that are just looking for a quick buck without any regard for their Franchisees.

Australia now has 35 Ovenu vans on the road, managed by 32 Franchisees and growing.

We believe strongly in a re-investment policy. We’re now running version 6 of our consumer facing website and you’re currently reading version 3 of our franchisee recruitment site.

The introduction of our tailored end to end client management software, enabling Franchisees to manage their businesses, retain clients and market effectively by giving them valuable reports and management tools has been the culmination of several years research and development.

In Australia we introduced a centralised 1300 smart number for prospective clients to call at the same time as the above but we always wanted to keep our franchisees in control over calls to their respective businesses. We therefore invested in a professional call centre to handle all incoming calls to the 1300 number.

The call centre Operators answer the calls and relay the contact details directly on to the Franchisees by sms and email. Ensuring that our Franchisees never miss a call and our clients are answered quickly and professionally. This also generates call reports, invaluable for building a client data base.

Find out more about our Franchise Package, or take a look at our Oven Cleaning Franchise Guide for more information on how to get started.

Register Your Interest In Our Franchise